Working in the area of spiritual formation, I often find that once a person discovers (or returns to) the foundation upon which being a Christian is based, he or she quickly begins to operate more and more like an idealist.

After all, when you get right down to it, Christians are meant to be idealists. The sum and substance of our faith is rooted in dynamic, unswerving idealism. For instance, truly committed Christians believe collective duty trumps individual aspiration. They believe personal comfort must never be prioritized above the greater good of a community. Simply put, as often as it is pertinent to do so, committed Christians put others first.

Others-first behavior is not necessarily what makes Christians unique, though. Any Christian who claims it is insults a multitude of people – non-Christians and non-believers – who also believe strongly in the virtues of selflessness and compassion for fellow human beings.

For example, that “love your neighbor as yourself” line originated with these guys.

However, the difference between Christians who put others first and a non-believers who do the same is that the Christians who act selflessly and compassionately do so out of theological conviction. They believe that these are the characteristics of the God who has saved them. Now, I’ve actually heard some skeptics criticize Christian charity as somehow less pure because it is not proactive but reactive – meaning it is performed out of duty to a directive. The misconception is that such virtue is less genuine/effective because it is done in response to a divine command, whereas the charity of non-believers comes solely from uncoerced human decency, making it nobler. But this kind of criticism is absurd! It’s akin to claiming an enlisted soldier’s patriotism is less genuine than a politician’s because the soldier is commanded to serve his country whereas the politician freely decides to do so.

“These coats would probably keep us warmer if they hadn’t been donated by Christians.”

A Sense of Something

I believe this is why the Church is still alive and well in our society today, despite droves of so-called “members” who have lost sight of (or never originally discovered) the foundation of this faith. The Church is still hanging in there because idealism is not instinct, because everyone wants to be inspired by something. We are naturally wired to fix our eyes on some kind of ideal – something on which to base our lives.

Sometime a person might have trouble naming exactly what that ideal is, but they nonetheless believe in the power of it.

There’s a scene from The West Wing in which a plucky young Republican lawyer is offered a job in a Democratic administration. After initially rejecting the offer, she changes her mind when she witnesses the employees’ idealistic dedication to their jobs. However, her particular brand of politics leaves many of those same people bewildered as to why she would even want to work with them. Her new supervisor, disgruntled at her presence in the office, presses her to explain her reason for accepting the job. Frustrated, she blurts out, “I feel a sense of duty.”

Her supervisor growls that her statement sounds like something out of a Gilbert and Sullivan musical. However, the beauty of the episode is that many of the people who initially view this Republican as an enemy not to be trusted gradually recognize a deeper sense of … something (duty? honor? conviction?) that binds them all together. What unites them is revealed to be greater than what divides them.

I believe that people want to be inspired – that we all long for a “sense of duty” to drive us and give our lives purpose and transcendent meaning. I believe we want an ideal we can believe in and that we can commit our lives to. And I believe the kind of ideal we’re really looking for is one that will not fade away – one which cannot fail (even if we fail to live up to it).

This is why I do what I do. Because I believe that kind of ideal is not simply taught by a guy named Jesus – it is embodied by him. If it is true that every person longs to know purpose and to experience a sense of significance in this world, then the message of Jesus Christ is truly for every person.

The Greater Good of a Great God

Interestingly, this is the message our world is currently witnessing in the figure of Pope Francis. He is not only living out his idealistic belief. He is showing people that they matter – that there is hope and purpose in this life, and that God – the ultimate ideal, full of love and truth – has ordered things in such a way that we can catch sight of this hope in and through the lives of his followers.

Why is Francis preaching messages of pacifism and peacemaking and compassion for those who suffer? Why is he continually calling for prayer for Ukraine and Syria and Israel/Palestine? Is it simply because that’s what religious people do (or are supposed to do, because our dogma demands it)? Or is it because there is an ideal that compels all people – from lonely individuals to whole continents – to strive for greater and greater levels of selflessness and compassion? 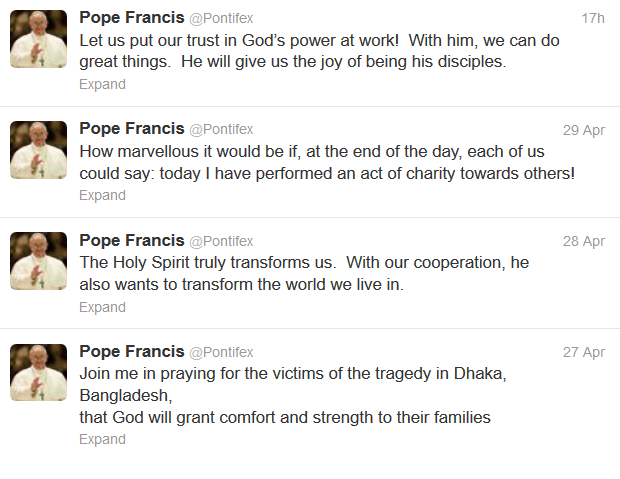 For the lazier among us, his Eminence is thoughtful enough to condense his messages to 140 characters.

You may remember a particularly distressing debacle regarding the Christian-based advocacy organization, World Vision. In the fall of 2013, the company changed its hiring policy, choosing to no longer bar homosexual individuals from employment. However, when the decision was leaked and Christianity Today reported on it the following March, droves of conservative evangelicals collectively threw a ginormous hissy fit. There were immediate calls for a boycott, and thousands of Christians terminated their sponsorship. After only two days, approximately 5000 child sponsors had ceased their relationship with World Vision; later estimates reported that somewhere around 10,000 children had been hung out to dry because of the drop in financial support. Forty-eight hours after the story broke, Richard Stearns, the organization’s president, announced that they had decided to nix the policy change. Sadly, since then, only a small fraction of sponsorships have been renewed.

However, one group of believers not only maintained their sponsorships, but chose to act further out of faithfulness to the ideal set before them by Jesus. This church, where a friend of mine serves as pastor, decided to literally put their money where their mouths were. They decided that they would not – could not – stand by and watch child after child be rejected like an unwanted newspaper subscription. Through social media, e-mails, letters and phone calls, they made it clear that they were willing to take on the financial responsibilities of every child that had lost his or her sponsorship. They claimed that while it was one thing to disagree with World Vision’s decision (a decision that had even been reversed), it was a whole other thing to withhold education and medical care – not to mention the Gospel – from an innocent child because of that disagreement. In other words, there was something much greater at stake.

We have been given an ideal that surpasses all others. We have been called to live unto a sense of duty instilled in us by a God who is living and active and on the move in this world. Let us never forget the deeper sense of something that binds us all together. Let us never lose sight of the greater good to which we have been called. As the writer of Hebrews encourages, “Let us fix our eyes on Jesus, the author and perfecter of our faith.”