I spent hours last week pretending to be Jesus.

If you grew up in an evangelical tradition of the Church like I did, particularly one that unfolded in or around the so-called “Bible Belt,” you probably remember a little thing called Vacation Bible School. Granted, it is an understatement to call this old standard of summer children’s ministry a little thing; anyone who has worked the VBS of even a small-to-moderate-sized church knows it often commands the attention of dozens, if not hundreds, of church members. Even before the actual event arrives, it’s all-hands-on-deck. There are materials to organize, rosters to assemble, costumes to distribute, sets to build, and a plethora of decorations to plaster in every nook and cranny of the church campus.

I was volunteering with Vacation Bible Schools  – whether willingly or compulsorily – well before I ever chose to enter the ministry. Over the years, I’ve contributed in a variety of areas: registration clerk, recreation leader, classroom helper, recreation leader, drama team member, recreation leader, and storyteller. Oh, and recreation leader. If you work in VBS long enough, you will find yourself donning a variety of hats. I mean that literally. You will end up sporting some of the most ridiculous and unnecessary headgear you’ve ever seen, all in service of the event’s exuberant, almost manic atmosphere. 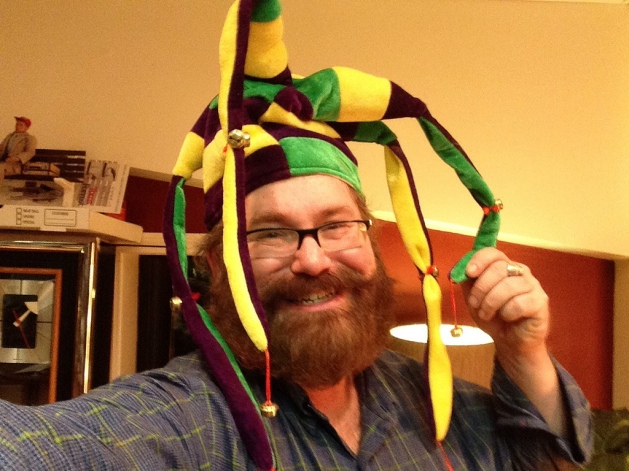 VBS: the only week of the year a senior pastor can wear shorts, sandals, and a jester’s hat and nobody complains.

This year, though, it was determined my headgear should emulate none other than Jesus of Nazareth, or as stereotyped a version of our risen Savior one might expect to find within a suburban Baptist church’s Vacation Bible School. Now, having spent years in silly period costumes – playing everybody from Noah to St. Peter to a Roman centurion to a wise, old Bedouin shepherd I ignorantly named Apu Nihasapiddananajada – I wasn’t immediately phased by the thought of putting on a fake beard and long-haired wig and, four times each day, portraying Jesus to an auditorium full of elementary-aged children. After all, I hammed my way through countless Bible dramas throughout high school and college, and, as a twenty-something youth pastor, directed just as many groan-worthy yet well-intentioned productions. So, I was no stranger to playing the Son of God.

Seriously, guys, I really do apologize for that name. I was 25, lazy, and I’d never traveled anywhere farther than southern Québec.

It wasn’t until I’d struggled through the first day of VBS that I realized I may have finally taken on a role that was over my head. I had never portrayed Jesus to children, let alone in such a wide-eyed, jovial, and interactive manner. I’d never had to go sans script and improvise my way through an entire performance, all the while happily acknowledging eagerly raised hands and the astonishingly perceptive questions that followed.

Why do your sandals look like my daddy’s flip-flops?

How did you get here from heaven? Did you fly?

If you were nailed to a cross, why aren’t there holes in your hands?

Do you know my grandmother? She lives in heaven, too.

I never thought I would envy the people who wrap themselves in long underwear and furry red and white coats every December to play Santa Claus. At least the people portraying Kris Kringle are working with an easily malleable mythology; when your backstory includes a fabled home at the North Pole and a perpetually efficient labor force of elves, what harm is there in adding the occasional fabrication?

Like the fact that, for some reason, the guy who knows every address in the world doesn’t even attempt to find baby Will Ferrell’s correct residence…

But when you’re playing Jesus to children (and you also hold a masters degree in biblical theology), the last thing you want to do is stretch the truth about God’s Son, or satiate them with a spurious answer. I didn’t want some unbiblical exagerration imbedding itself in their brains for years to come. By the same token, I didn’t want to be dismissive of their questions, either. I knew these kids weren’t asking merely to humor me. They weren’t simply playing along. Each concern was genuine; each child expected an answer.

I remember having several conversations during my years in seminary regarding the alleged “age of accountability.” The essential question went like this: At what age is it appropriate to encourage a personal response to the gospel message? Few of my fellow grad students debated whether it was all right to teach kids the story of Jesus, even the grisly and mysterious details of his death, burial, and resurrection. After all, most of them had heard the story themselves since before they were even out of diapers. However, plenty of them differed on what age children must reach before they can genuinely respond to the inherent truth of that story – when they can be expected to actually understand what it really means to “admit, believe, and confess.” Five years old? Seven? Ten? How about a wise-beyond-their-years six? How about an eight-year-old who always makes the Honor Roll?

I had my own opinions. When I became a father, those ideas didn’t change all at once, but the older my children get, the more sheepish I feel about how uncompromising I used to be. I used to answer decisively to the age of accountability question.

Lately? Not so much.

Plenty of people who reject the teachings of Christianity are quick to label things like Vacation Bible School nothing more than manipulative indoctrination of the young. And I will abashedly acknowledge there is plenty of misguided and even damaging manipulation alive and well in our churches today (and not just with the young). However, as I struggled through four days of Good Shepherd performances, inundated each day with questions upon questions, one thing became clear to me. It is a fool’s errand to definitively apply, across the board, an age of accountability for children hearing, and reacting to, the gospel.

While Christians may disagree on what exact moment in a person’s salvation experience the Holy Spirit spurs his insight, even more mysterious is the vast array of ages that receive his prodding. It can take a lifetime for the truth part of The Way and The Truth and The Life to resonate in some folk’s minds. And yet, sometimes the Spirit will choose to illumine the path of salvation to a child who hasn’t yet mastered the “loop-it-swoop-it-pull” method on their sneakers. 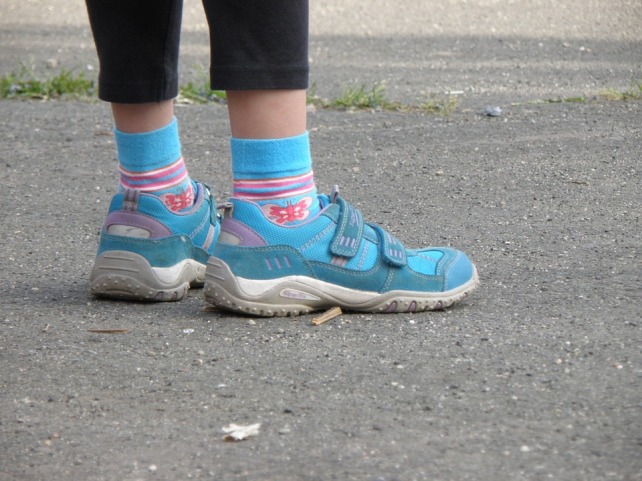 Who’s got time for laces when you could be reading the collected works of Kierkegaard?

Throughout this past week, I was regularly reminded of the moment I awkwardly stepped onto the trailhead of my own spiritual journey. I was only eight years old when, one dark night beneath the bed covers, I whispered the Sinner’s Prayer. My sister had died less than a year earlier, in a freak accident on a church youth group outing. Prior to that moment, I hadn’t given much thought to death – the how or the why of it – or what exactly the afterlife might be, if there even was such a thing. I was just a kid who liked marshmallow cereal, Saturday morning cartoons, and Voltron. My acquaintance with Jesus was through the handsome, white-robed depictions on Sunday School room posters and storybook Bible covers. I knew he was the guy all that Sunday morning stuff revolved around, and that he somehow related to the Sandy Patti and Amy Grant songs my mother listened to on our car’s cassette player, but I couldn’t have articulated that connection in any coherent way. Still, I believed in God because I was told he was real, and because we bowed our heads before every meal, and because there were at least a dozen churches in my tiny, bucolic town and how could every single one of them be wrong? It just made sense to believe in God.

But after Katy died, it stopped being enough for me that God’s existence made sense, that Jesus was a nice guy who wanted you and me to be nice, too. In the void left by the passing of my only sibling, I was curious for more than logic. I didn’t realize it until much later, but what I was really interested in was hope. So, I responded to the gospel because, alone in the dark beneath the dubiously protective shroud of my covers, I decided there must be more to Jesus than niceness. Something about the combination of his cross and his empty tomb offered possibility, a semblance of hope beyond the dark finality of death. I didn’t have the whole equation worked out yet, but what I did have was the memory of a simple prayer our pastor had taught a sanctuary full of wiggling grade-schoolers a few weeks earlier at the annual Vacation Bible School.

That patchwork prayer was the first meager offering I brought before the God of the Universe.

There are some who could no doubt point to that moment as yet another example of indoctrination – the actions of a child who had been subtly brainwashed to interpret a recent tragedy, and his own connection to that tragedy, all according to something that amounted, ultimately, to little more than a fairy tale. If I consider things from their perspective, I can understand where they’re coming from.

I don’t blame you, Bernie. If I were you, I’d probably think it sounded crazy, too.

And, of course, there is much more to salvation than the articulation of a prayer. More than human cognition and abstract thinking. Because just like the kids at last week’s VBS who prayed such a prayer to God for the first time, eight-year-old me didn’t understand everything about what I was praying. I couldn’t fully comprehend the ramifications of what I was saying to God. But, oftentimes, understanding comes later. If we Christians are honest, and we certainly should be, we will admit that genuine understanding takes longer than even a lifetime allows. As Rich Mullins once said, “We never understand what we’re praying, but God, in his mercy, does not answer our prayers according to our understanding of them, but according to his wisdom.”

All I know is what I have become. All I know is that from time to time I have found another couple of crumbs scattered along this path. Not every day, of course, but every season. If I keep my eyes peeled, eventually I spy yet another modest clue that leads me onward. Perhaps one day I’ll discover that they were all incidental, and this path I have chosen has lead me only to a dead-end. Or, perhaps I’ll come to the termination point, push back the undergrowth of weeds, and behold a wide and magnificent river.

Several times during their handful of years spent together, Jesus’ disciples would ask him what it really took to be considered “great” in the heavenly kingdom. On one of those occasions, Scripture says Jesus called a little child over and had him stand in front of the disciples. “Unless you become like this little guy,” he told them, “you’ll never even get a look at the kingdom. And whomever makes room in his life for children just like this one is the one who makes room for me.”

I don’t know if the children who encountered this freckled, fake-bearded Caucasian Jesus last week received from him any great truth. Then again, maybe they weren’t the only ones the Spirit was interested in teaching.