For Bayo, my friend 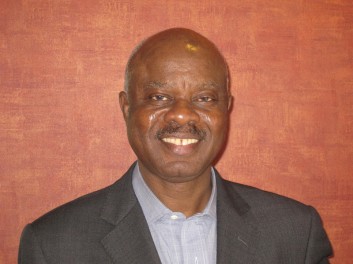 In addition to being an expert couturier of incredible skill, the person in question was a faithful deacon and usher in the church, not to mention the director of a nearby community outreach ministry. And just as predicted, only two weeks later, this man walked up to me with a smile on his face and, in his thick Nigerian accent, said, “I would like to make you a suit.” As always, he was impeccably dressed that morning, wearing one of his own handmade suits – a light gray set accented with a beautiful scarf of magenta and scarlet. “Would that be all right with you?”

“Oh,” I said, surprised only by how soon my pastor’s prediction had come true. “That’s very kind.”

“First, I will need to measure you.” He had a small tape measure in his pocket. After the worship service began and everyone had been welcomed, we went to my office. In a flurry of fluid movements, he measured the lengths of my arms, legs, waist, and shoulders. Some of the assessments I had never seen a tailor take before. Some he wrote down on a little scrap of paper. Others, he seemed only to file away in his mind. When he was finished, he said, “I will have it for you next week.”

“Really?” I asked, a bit incredulous. “Next week?”

“Oh yes,” he replied with a smile.

It was an odd thing to anticipate the unveiling of that suit. It wasn’t just that he had not asked my preference regarding style or color, leaving me no idea what it would look like. I also couldn’t help but wonder what kind of use I would get out of it. Only a week earlier, an older gentleman in the church had shown up at the office, interrupting me amidst a day full of meetings only to inform me that he was disappointed with the way I dressed on Sundays. He described my appearance as discourteous, unbecoming of a minister. I did my best to hold back my anger, but I felt terribly insulted and disrespected. That man’s comments remained with me throughout that week and into the next. It made me self-conscious on Sunday mornings and Wednesday nights when I interacted with other church members. I couldn’t help but wonder if this was all some people were thinking about when they looked at me, when they sat in my Bible studies, when they bowed their heads as I led them in prayer.

It wasn’t like I was wearing blue jeans and sneakers around the church. I wore nice pants, though they weren’t always of the more formal, pleated variety. I wore button-up, collared shirts, though not always with a tie. I tucked my shirt in; my hair was combed somewhat. I’d been a bit overweight lately, but all things considered I couldn’t look that disheveled, could I?

As I weighed the argument about my physical appearance, and considered what level of importance, if any, modern fashion should have in the worshipping life of a church, I began to wonder if the suit maker felt the same about me. Had he offered to make me a suit because he also disapproved of the way I dressed? Had I disappointed him as well?

It wasn’t that I didn’t own other suits, or that I see no value in them. I did, and I do. What bothered me was the prospect of formality, propriety and tradition becoming wedges between me and the congregants of the church. Was genuine relationship contingent on approval of someone’s physical appearance? Would giving in to wearing a suit and tie every week be a perpetuation of shallow relationships? What of the sobering statement from 1 Samuel 16, in which the Lord reminds Samuel that He “does not see as mortals see; they look on the outward appearance, but the Lord looks on the heart” (v. 7)?

As such, I was anxious to receive this undeserved, unsolicited gift. However, I was also anxious about how to properly honor the man willing to make it for me.

The next Sunday, he brought it to me on a hanger, and once again we went to my office where I tried it on. It was beautiful – a dark, navy blue two-piece suit with light blue pinstripes. I was astonished at how luxurious it looked and felt, and that it needed no alterations. His measurements had been perfect in every respect. I was at a loss for how to thank him, simply saying again and again, “Thank you so much. This is so nice. Thank you so much…” He only nodded humbly and told me it had been his pleasure, backing away as if he knew I had more important matters to attend to that morning.

I was scheduled to preach in the morning services the Sunday after that, and over the course of that week I found my thoughts were shifting. I was no longer uneasy about my perceived appearance, but rather moved by the rare and unique feeling of being the recipient of an unmerited blessing. I thought about the suit, about the beauty of it. I thought about how its superior, hand-crafted quality far exceeded even what the older gentleman who had criticized my appearance probably had in mind when he wished for a better-dressed version of me.

On that Sunday, my suit maker said, “That suit looks wonderful on you!” It was a few minutes before the early worship service began, and we stood by ourselves near one of the hallway coffee pots. “And that tie is perfect!”

“You think so?” I said, looking down sheepishly at the sky blue, paisley tie I had chosen that morning.

“I feel so fancy,” I said with a nervous laugh.

I could see that he was grinning with pure enjoyment of the moment. Reaching out, he touched the lapel of the coat, his old fingers tracing the tiny stitches he had done himself. Memory in the sense of touch. “But, you know something?” he said. “It is not the suit that makes a man look good. It is the way he wears it. And you… you wear that suit well.”

Again, a fluttering of inadequate thank-you’s. Then I said, “I was planning to mention you briefly in my sermon today. Would that be all right with you?”

He gave a humble nod.

And so, that morning I stood before the congregation and spoke about using everything God has given us to impact others – from our manner of speaking, to the specific life interests that bring us joy, to the unique skills with which we have each been blessed. I told them how I had acquired the fine suit I was wearing that morning, and who had been its maker. “I don’t think he made me this suit because he thought I dressed poorly,” I told the congregation. “No, he made me this suit because he makes suits – very nice suits. He’s good at it, and he wanted to bless me in the best way he knew how. God created him to bless this world through specific gifts, and one of those is making beautiful suits. It’s one way that he shows the steadfast love and kindness God wants to pour into the whole world.”

I looked to the back of the sanctuary where my couturier stood in his own lovely suit. “Thank you,” I said to him, “for being obedient with your gifts, and for blessing my life in a most undeserved way.”

He only nodded that humble nod, the remnants of that excited grin still on his face. He lift a weathered hand as a way to communicate he was more than honored.

This Thursday, I will wear the suit again. So will many who were similarly blessed when they, too, received their own handmade suits from the selfless man who was at his happiest when he was uniquely blessing others. We will wear what we each affectionally refer to as our “Bayo suit” to the memorial service that will celebrate his extraordinary life.

Bayo Otiti was an extraordinary man. Born and raised in Nigeria, he found great success as a couturier and clothier in America, eventually outfitting people far more famous and successful than a lowly church minister. However, his passion extended well beyond suit-making. A former Muslim whose wife prayed for him to respond to the call of Christ, Bayo not only became a committed follower of Jesus, but established a vibrant ministry in the towns of Clarkston and Chamblee in metro Atlanta, where he worked closely with at-risk children and immigrants, spearheading community outreach programs and building deep relationships with everyone with whom he came into contact. His life was far more exquisite than the beautiful suits he made. And, believe me, that’s saying something.

I knew him only a short time – not even a year – but I did learn one thing from Bayo I will remember always: Just like a fine suit, what a person’s life looks like on the outside does not matter near as much as how that person lives it.

2 thoughts on “The Suit Maker”