the blood of bulls and goats cry out
from the ground, a ferment flowing
was death for naught, o chosen ones?
the left hand cuts; the right hand grasps
for pleasures to fill the clean slate
perpetual slaughter provides
the fire burns, never dies away
in your place we stand, knife to throat
will you remember us at all?

Substitute for sin, once for all
if this is what they need then why
were we called to give for so long
and why, when they finally see,
do they debate the hows and whys?
Ransom, Penal Satisfaction,
Christus Victor, Exemplary,
Universal or Limited
what power is there in a name?

is not power found in the blood?
does it not ferment even now?
does it not flow for you each day
you chosen ones, you wanderers?
the left hand pierces flesh with nails
the right hand gambles on garments
and the eyes behold death and say
surely this was a God unknown
will I remember him at all?

for those who faced death every day
so you might have a way to peace
the blood you spilt speaks better words
than those you use to describe this
in sight of death, theories shudder
and hang their heads, speechless, silent
and hope in this redemption too
let these words reign, for what we were
He is, forevermore, Amen.

“The Bible has all the answers.”

Surely you’ve heard this folk saying before, whether stated confidently by someone who actually believes it, or sarcastically by someone who might once have believed it but no longer does because when he or she finally brought a question to the book, nothing in its pages seemed relevant.

Often, when you encounter people of the second group, you learn that they have laid aside their trust in “an ancient book full of superstitions” in favor of science or reason or rationalism or humanism or methodological naturalism. In other words, what they’ve set aside is any form of mysticism. Whether because it failed them in the past, or because it never seemed a viable option in the first place, they are not comfortable with any knowledge that is apprehended outside of the intellect.

This, of course, is perfectly understandable. In the absence of cold, hard facts (though why facts must be “cold” and “hard,” I’ve never understood), having faith in something will always mean holding hands with doubt and uncertainty. Some people would rather avoid the feeling. Certainty is a matter of the will, and if it can’t always be effected, it can at least be feigned.

I’ve talked with people who’ve told me, among other things, that they don’t like how the Bible addresses the formation of our planet and the rest of the cosmos. They claim that if there really was a divine being behind its creation, then certainly the Bible would include more details. But, instead, there’s just a short poem that scientific research has already proven to be inaccurate.

Sometimes, I ask them why they can’t have the kind of unwavering faith in God that they seem to have in the scientific method.

They respond by saying that their allegiance to science has nothing to do with faith, but rather with facts. They tell me that science explains mysteries, while religion merely hopes that one day Someone will reveal the purposes of those mysteries.

I don’t ask the questions that come to my mind next, usually because I already sense the conversation has taken a turn for the worse. I’m not sure they’re mindful of it, but I’ve found that when you begin speaking about faith to a person who has cast it aside in favor of reason, you’ve often encountered a point of view that believes the two are mutually exclusive. That faith and reason have no relationship with each other. This, of course, is a fallacy, but in a culture consumed by competition, it is difficult to see past the versus archetype.

It is one of the questions I took to the scientific method, but found no reasonable explanation. It is a mystery that has yet to be sufficiently answered.

I would ask them, “Why are human beings so often kind to each other?”

It is another question I’ve turned to science and reason and methodological naturalism to explain to me, but the only answer they can give is a shrug of the shoulders and the words, “We shouldn’t be.”

The Bible doesn’t explain these questions either – at least not in the way a rationalist would appreciate – but that is the point. Such fundamental elements of human existence remain unexplained. They remain mysteries. And even if someone rejects mysticism, he or she cannot fully escape mystery. Sure, perhaps one day the scientific method will finally reveal the reason why human beings laugh, or why we offer kindness to others even when no personal benefit comes of it. After all, science has shown a great track record for discovery.

But amidst these answers, other mysteries remain. Because the two are not polar opposites. They are not at odds, but in relationship with one another.

I don’t know about you, but that thought fills me with joy. I’m not sure why.

“You wander from room to room
Hunting for the diamond necklace
That is already around your neck.”
-Rumi

Prompt: Write something in response to the quote.
Parameters: 15 minutes 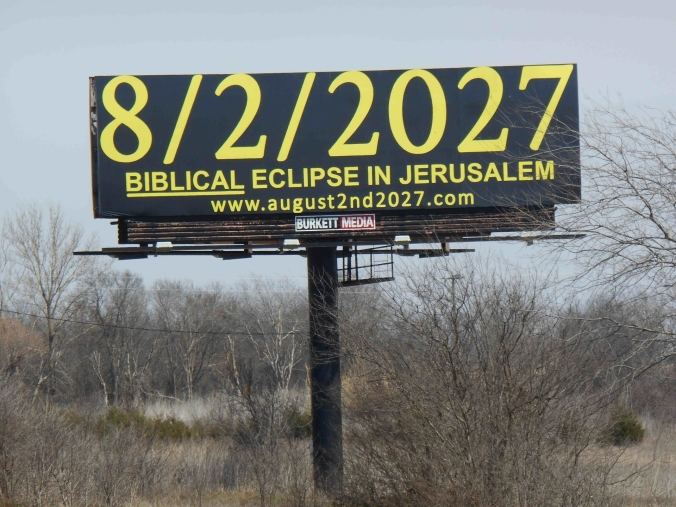 They choose a billboard.

Though there is still thirteen years to go, they follow the instructions of their pastor. They put down a deposit and find someone to design the look of it. After this, one of the crews that changes out the facades takes that design, renders it according to the necessary materials, and a few days later the date is displayed for every northbound motorist to see – an intentional eyesore, gaudy in its size and color.

Beneath the date, in smaller letters, they offer a cryptic subject line and provide their website.

And now they wait.

In thirteen years they will fly to Israel. They will bring along suitcases packed solely out of practicality: what do you wear to a Second Coming?

They will do a little sight-seeing first. Who wouldn’t? It’s the Holy Land, after all, and they don’t expect to ever lay eyes on it again. At least not on the way it looks now, all corrupted by non-believers and heretics.

And then, on the determined day announced by the pastor who, in his adamancy, has satiated their hopes for an escape from this corrupt world, they will climb Mount Olivet (as they prefer to call it), pick a nice spot facing the once holy Holy City, and fix their eyes on the vista. They will wait to see it change. To see the clouds do something out of the ordinary. To see Someone split the sky.

And take them home.

And then, once the day ends and that which they have waited thirteen years to see does not unfold, they will look at one another, confused, heartbroken, disillusioned. Some will make concessions, suggesting an innocent glitch in their pastor’s figuring due to time zones or hemispheres. The one who endlessly quotes the Old Testament will suggest that the day the sun stood still, as recorded in the Book of Joshua, could be a reason, and they should stay put one more day to be sure. A few others will feel their hopes – both in deliverance and in the man they have called their pastor – dissolve. The pastor himself will say nothing. Not yet, anyway. Not until he can figure out how to explain himself without losing the bulk of his flock.

They will return to their home country. The deposit will expire. The billboard will revert to the company that owns it, and an advertisement for a truck stop or a local university, or perhaps just one of those “Does Advertising Work? Just Did.” signs will replace their announcement.

And one of them – at least one of them – will turn to her well-worn Bible out of despondency, to the Scriptures she has memorized and manipulated but never respected. On one sunny morning, not long after her return from the Mount, she will sit at her kitchen table, a mug of steaming coffee to her right and a journal and pen to her left, and she will read the words before her with no predetermined agenda. And for the first time in longer than she can remember, the sound of the Savior’s voice will not sound to her like the voice of the old pastor with his curmudgeonly sermons and dire predictions.

In that moment at the kitchen table with the steaming mug of coffee and the morning light filling the room, he will gently remind her that hoping in his return has nothing to do with predictions and signs and best-laid plans. The escapists and code-breakers and treasure hunters go after such things. “Here it is,” they cry, though they have found nothing at all.

She will pick up the pen and write only seven words in her journal, the shortest entry it has ever received.

“The kingdom of God is within me.”