Years ago, after being hired to teach at a new school, I met a schoolteacher and we immediately hit it off. We had a lot of things in common. We were roughly the same age, we both gushed nerdy love for many of the same novels and writers, and we both believed that, no matter what career they eventually embarked upon, helping our students learn to be well-read was the pathway to maturity. I could tell we were destined to be more than colleagues; we were going to be confidants.

This is why I was so heartbroken when my newfound friend quickly turned his back on me. He stopped eating lunch with me, stopped asking my opinions on his lesson plans, and seemed to keep his distance socially. He was never overtly rude or insulting, but it was clear he had decided he didn’t want to be my friend after all.

The reason for his change of heart isn’t a mystery, though. I know exactly why he pulled away. We met in late summer of 2008, four months before the presidential election. One day not long after we had connected, our conversation turned to the candidates. I mentioned to him that, out of curiosity, I had recently watched one of Barack Obama’s speeches given earlier in the year at a church on the subject of religious conviction. I told my new friend I liked the speech, thought it was refreshing to hear a candidate speak openly about faith in a non-pandering way.

My new friend suddenly turned to me. “You’re not going to vote for Obama, are you?!” he asked, staring at me with wide, fearful eyes. 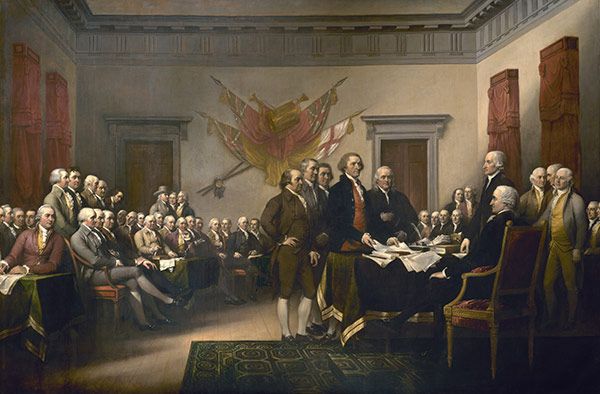 I was caught off-guard. Honestly, I hadn’t even thought that far ahead. The election only flickered in my periphery. (This was 2008, before political news became a ravaging lion seeking whom it may devour.) It was something I thought about sparingly, as there were far more pressing matters in my life, like beginning a new school year, setting up a home, and getting to know my colleagues. “I… well… I don’t know. Maybe. Maybe not.”

“But he’s a Democrat!” my new friend almost shouted, putting a little extra stank on the word “Democrat.”

It wasn’t long before this friend of mine ceased being a friend of mine. He became just another coworker. We hardly spoke other than in evaluation of certain students or other school business. We offered a congenial hello to one another in the hallways. However, he and his wife were always conveniently unavailable when I would invite them for dinner, but thanks to social media I was privy to plenty of selfies of them hanging out with other teachers, sometimes on the very nights they’d told me they had too much work to catch up on.

I’m not saying our falling out was only because I had something vaguely glowing to say about a Democratic presidential candidate, but that certainly was the tell-tale crack in the ice. 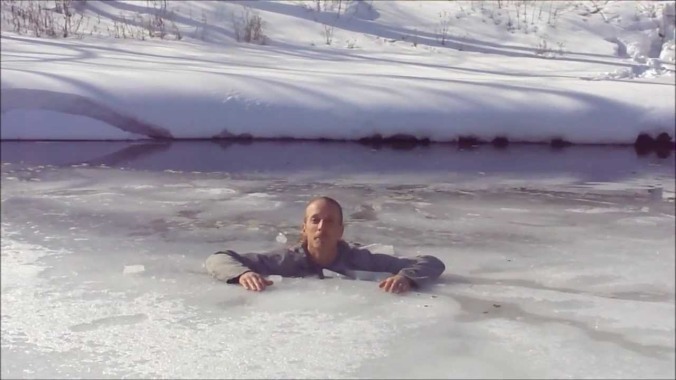 “I’ll rescue you, but only after you admit you’re wrong and I’m right.”

One would think the things which had drawn me and my colleague together, the subjects that had dominated our conversations up until that moment of disagreement, would have been more than enough to salve whatever abrasion was inflicted on our budding friendship by differing political views.

The problem, of course, is that, over the last decade or so, We the People are far more preoccupied with what divides us than what unites us.

I’m talking about more than disagreements over politics here. I’m talking about all the suspicion and distrust running rampant in society today. I’m talking about unfairly assuming the worst in people whenever they express an opinion or belief with which my own opinions or beliefs clash. I’m talking about writing people off as valueless because even one note of discord must mean there can be no compatibility – no way forward. I’m talking about turning a deaf ear to those who dare to question the legitimacy of something I hold true, because if they don’t support that they must be a part of some opposing agenda hell-bent on destroying every single one of my principles. Best to be on-guard. You can’t trust anyone these days. 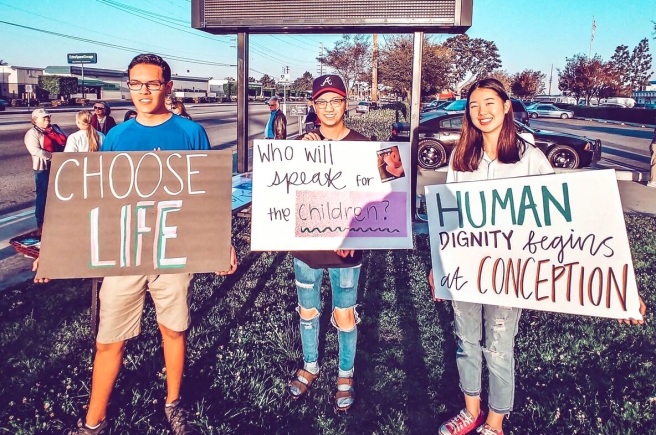 Look at these self-interested fools so carelessly promoting their own interests!

The vast majority of cable news shows and op-eds are saturated with this kind of social outlook, and because we’re oversaturated by the Hannitys and the Maddows and the Breitbarts and the Voxs these days, and because social media has turned into our own personal echo chambers, we’ve learned the very unspiritual discipline of drawing lines and erecting barriers. Dialogue between sides only happens when there is a guarantee neither side will come out a bigger winner. We are a culture of blustering cowards, quick to take offense and fearful of admitting we might be mistaken about a chosen belief.

A prime example of this is the recent tumult over the Christianity Today controversy, in which the outgoing editor wrote an article in support of President’s Trump impeachment based on the same reasoning the publication’s editors had called for President Clinton’s impeachment back in 1998. Yes, it was an article that sharply divided readers, which is to be expected. The greater concern, though, rose not out of the response of those readers and Christian personalities who disagreed with the editor (they are entitled to their opinion as much as he is), but the subsequent questioning of the magazine’s entire witness as a source for Christ-centered journalism. People angrily and ceremoniously ended their subscriptions not because they didn’t like the magazine itself, but because disagreement on a single issue had forever spoiled their ability to read anything else published under its banner. In one fell swoop, Christainity Today became the enemy.

As Christians, we like to laud the virtues of humility, empathy, compassion, and mutual affection. These, after all, were the things extolled by the apostles in just about every letter we find in the New Testament. However, these days it’s becoming increasingly rare to see these virtues lived out among even professing Christians who disagree. Whether its spiritual issues of theology or worship, or cultural issues of politics, sexuality, immigration, or the environment, more and more Christians are losing their objectivity and the grace that necessarily goes with it. 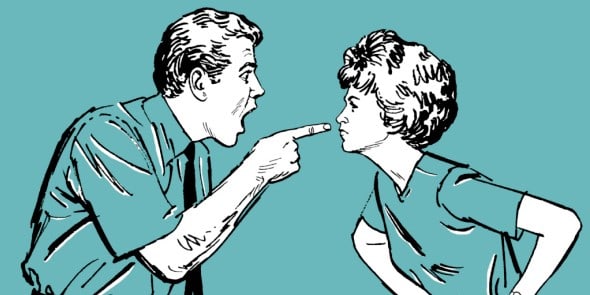 “We may both be Southern Baptists who pray fervently, cherish God’s Word, and believe the Church should be taking the gospel of Jesus to the world, but your church sings way too many praise choruses, so…”

All of this is a far cry from the teachings of Jesus, who looked his listeners right in the eye and said, “I know you’ve heard the teaching, love your neighbor and hate your enemy. But I’m telling you that won’t cut it. You’ve got to love your enemies, too, and you’ve got to pray for those who threaten you, because that is what children of the Heavenly Father do” (Mt. 5:43-45, my paraphrase).

Interestingly, the word “love” is the Greek agapao. It does not mean to merely tolerate, or to bite your tongue and just utter a curt “hello” while passing that person in the hallway. It means to welcome, to kindly entertain, and to love dearly. It means, in essence, to erase the barriers that stand between your enemy and you. Agapao is not easy. It’s risky. Love this way, and you can expect to be let down, to be pushed aside. But that doesn’t mean you give up. It’s the way Jesus loved, and loving this way led him all the way to the cross.

Maybe this is part of what Jesus meant when he told people to be his followers to take up their own cross. They didn’t have to die for their sins – that was his job – but they did have to embrace the kind of sacrificial love going to the cross requires. Love in a world that hates. Erase lines in a culture that is obsessed with drawing them. As far as it depends on you, welcome your enemies. Entertain them – which means opening dialogue, listening, and striving for understanding. If common ground still can’t be found, settle for mutual affection in spite of your disagreement. 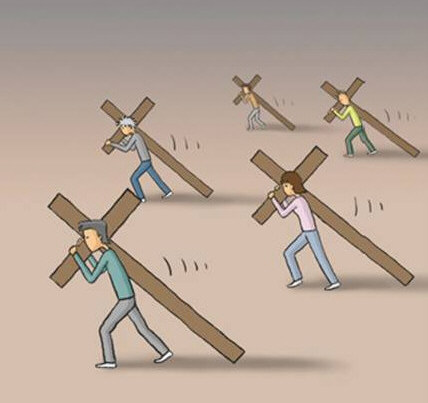 How about that? Your cross isn’t all that different from mine.

When we withhold kindness, refuse to engage in dialogue, or go so far as to break fellowship with someone simply because they don’t share a view we feel is particularly important, we’re failing everything that the Church should exemplify. We are not trusting in the power of the gospel to, like Simon the Zealot and Levi the tax collector, unite people in faith, hope, and love in spite of whatever political, cultural, or sociological differences they may hold. We may think our distancing has nothing to do with love. That we’re only protecting ourselves – standing on our principles and refusing to associate with weak-willed or deceived people. However, this only goes to show we’re the ones being deceived. The best way for the Evil One to hold back the kingdom of God is to get us to write each other off for peripheral reasons. When we do this, we carry the bad habits of our fractured world into the sacred bond of Christian fellowship.

So, the question is, who are your enemies right now? Who have you written off as useless because their view on something peripheral to this life clashes with your own? Maybe you’ve written off anyone wearing a MAGA hat. Maybe you’ve spurned anyone who’s criticized part of the President’s agenda. Maybe you think anyone who doesn’t accept the truth of climate change is a threat to the world as we know it. Maybe someone who dares pay attention to a “pro-choice” candidate is dead to you. 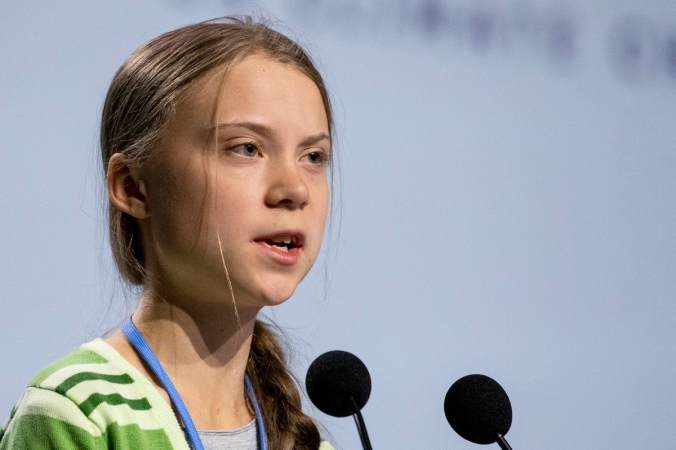 Ugh, a sixteen-year-old who writes books and passionately advocates for lower carbon emissions instead of just Snapchatting her friends and binge-watching Riverdale all day. What is our world coming to?

Or maybe it’s even closer to home. Maybe you’ve distanced yourself from people in your own church because they interpret Scripture differently than you, or hold a different worship philosophy than you, or have a different perspective on missions than you. Jesus said to love our enemies, and often those folks are a lot closer to us than we realize.

I suppose we can go on distancing ourselves from each other, just to feel safer and little more confident in our own opinions about the world. But that would be taking the easy way out, and where’s the joy in that?