The first thing you notice is the smell.

It is putrid, rancid – a sour stench that turns the stomach. It is the fetor of wet dog, a refrigerator thawed and spoiling in the summer heat. It rolls in from the shore, across the sand, through the weeds, born upon the usually pleasant inland breeze. And it hangs in the air. It soaks the palm branches and the leafy, green vines that color the shore. Step outside your door, and you catch the scent in seconds.

But the smell is not the worst of it. The smell is only fallout. It is the indicator of death, but it is not death itself. For that, you must go to the source. You must brave the stench and journey down the wood-planked pathway to the water’s edge. Here you find the culprit – one long, seemingly endless stretch of decay frames the shore. Where once had been only an adorning necklace of seaweed, and accumulated belts of colorful shells ringing the beach – the ever-present deposit of a teeming, vibrant world beneath the waves, a world that invited you to wade in and draw your fingers and toes along the ocean’s floor, feeling for suspicious lumps, spying the scuttling legs and mandibles that flail from within apertures of exquisite, swirled conchs, reaching down and lifting up sandpaper-like discs alive with tiny, wriggling tentacles, grasping hold of living stars the size of dinner platters with arms that curl around yours and kiss your skin for dear life until you finally release them again into the murky depths where they belong…

Now, before your bare feet can even sink into the wet sand at the water’s foaming edge, what you find is a sickening, grey-black mantle of corpses spread across the entire beach. A cataclysm encircles the entire island, like the leavings of some terrifying, occult ritual. Grouper, bonito, croaker, and redfish lay strewn like Antietam’s dead, lidless eyes staring up at white cumulus masses above. Anchovy, threadfins, and bluebacks bake in the shadeless tropical heat. 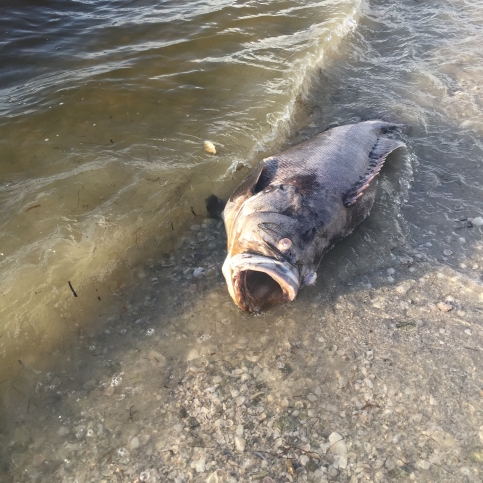 You stand there, staring at the carnage, awestruck that so much life has been lost outside of your sight. Death stealthily spreads out across the gulf, infiltrating every bay, every cove, every canal. Each morning you awake to find a not-so-fresh stratum of the ocean’s dead expectorated upon dry land, as if the sea has engaged in some kind of macabre renovation project, its inhabitants continually tossing the dross and detritus off the edge of their world.

You peer into the tumbling breakers, intent on perceiving what you cannot really see. A scarlet bloom of sickness just beneath the surface – a billowing red cloud, like chum slopped overboard and spreading out into the glaucous blue. From where you stand, though, there is nothing to see but the aftermath. You behold the effects, but the cause remains veiled. This irrepressible algal contamination that has laid low so much life is invisible to you. It is difficult to fathom. How can so prolific a killer keep its executioner’s mask in place? How has the entire sea not turned both the color and viscosity of blood? 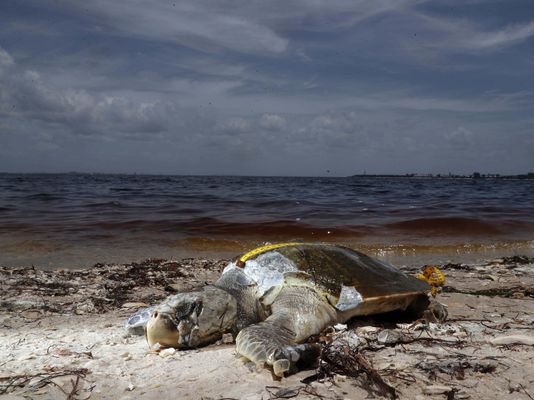 For millennia, he who stood at the ocean’s edge, letting his feet slowly sink pleasantly into the gritty mud while gazing upon the endless ebb and flow of the waves, felt compelled to contemplate the vastness of human existence. Like the relentless creep and withdrawal of the tide, so our own lives reach out for safety, security, meaning, but then recoil in order to preserve a healthy amount of distance from everyone else. We are as numerous as the waves, and just as unique – each one of us determinedly roll in with our own unique size and strength until we finally break and collapse upon ourselves. Nothing lasts forever.

And, all that time, beneath those waves lies a whole other world. If you did not perceive it before, now that the dead of this world have been vomited up onto the border of our own, you realize it. So much life – so much existence – schooling and swarming and spreading out beneath the surface, and yet most people never give it any more than a passing, facile thought. We putter about in our little worlds, focused on our highly individualized concerns, and we glance up and beyond the stirred dust cloud of our ceaseless activities only long enough to briefly acknowledge an existence extending beyond our own. We give it no real thought, because we have no time to do so.

Standing at the edge of the sea, one is compelled to contemplate one’s place in the world. Standing at the periphery of a red tide, one is forced to consider one’s mortality – to be reminded that, short or long, life as we know it does indeed come to an end. That we who are finite are subject to the consequences of finitude.

But you hope in Something else. Another place, another time. Another sea, another shore. Somewhere in which the finite are reborn infinite, and the waves roll forever, uncontaminated and teeming with glorious new life.